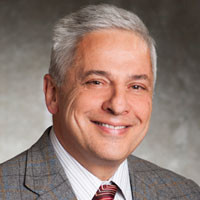 A noted author of more than 60 publications, many accepted for presentation at International and World Congresses of Gastroenterology and Endoscopy, Victor Witten, M.D., is especially skilled in therapeutic and interventional endoscopy including endoscopic retrograde pancreatocholangiography (ERCP). ERCP is often used for non-surgical removal of gallstones and for the diagnosis and treatment of the diseases of the pancreas. He pursued further training in endoscopic ultrasonography (EUS) in Paris, France, through the University of Medicine and Dentistry of New Jersey. In conjunction with his clinical expertise, Dr. Witten utilizes the latest technology, such as wireless capsule enteroscopy (also referred to as the “pill camera”), for the diagnosis of Crohn’s disease of the small bowel, Celiac sprue and obscure sources of anemia.

Prior to joining Drs. Birns and Gloger in private practice, Dr. Witten served on staff at Sinai Hospital of Baltimore and held an appointment as assistant professor of medicine at Johns Hopkins University School of Medicine. In 2005 he was elected President of the Maryland Society for Gastrointestinal Endoscopy.

Dr. Witten holds a Certificate for Invention in Medicine, which he received for development and performance of the first in the world pharmacological vagotomy through endoscope.

In a 2011 survey published in the Washington Post magazine, Dr. Witten was recognized by his peers as a “Super Doctor” in gastroenterology.

Member of Crohn’s and Colitis Foundation of America